When we look back at 2016, much of what we have been saying all year long has played out as expected. Now, we are looking forward to in 2017.

BREXIT was seen as a substantial shock across markets, but all along we said nothing had changed; as all markets with the exception of the GBP quickly traded back to pre-Brexit levels.

But the biggest event we saw in 2016 was the election win of Donald Trump. This was a major fundamental shift and saw many asset classes put in major reversals.

Since the November 8th Election, both the US Stocks and US dollar have rallied significantly. With the technology sector lagging, this rally has been led by both the Financials and Energy sectors.

The question now is- what will propel these markets forward in 2017?

The current state of equity markets

At Trade View, we consider all aspects of a market: from the wide fundamental landscape to specific market internals.

2016 will go down as a very unique and strange year for many reasons. After what was one of the worst starts to a year (Jan 2016), we have witnessed a complete U-turn as markets close the year very strongly. This is quite ironic, but not surprising.

The Russell 2000 for example- an Index covering the Top 2000 US listed small caps, recorded it’s largest monthly move to the upside (in history!) this November: 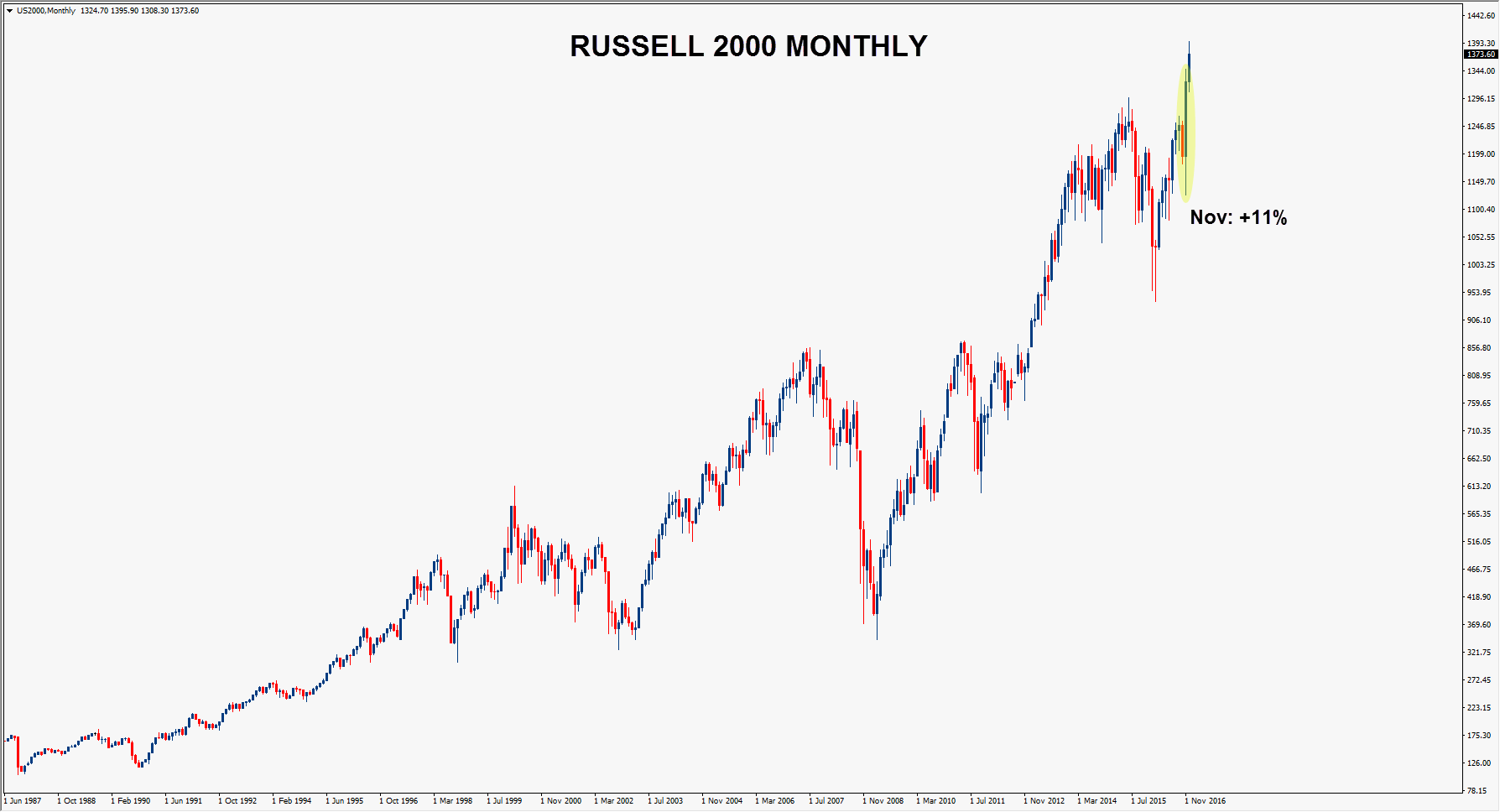 From the lows of November, this market is now up more than 22%!

Another example of the strength of this move can be seen in the Dow Jones, which has yet to record two (2) consecutive down days since Trump was elected President: 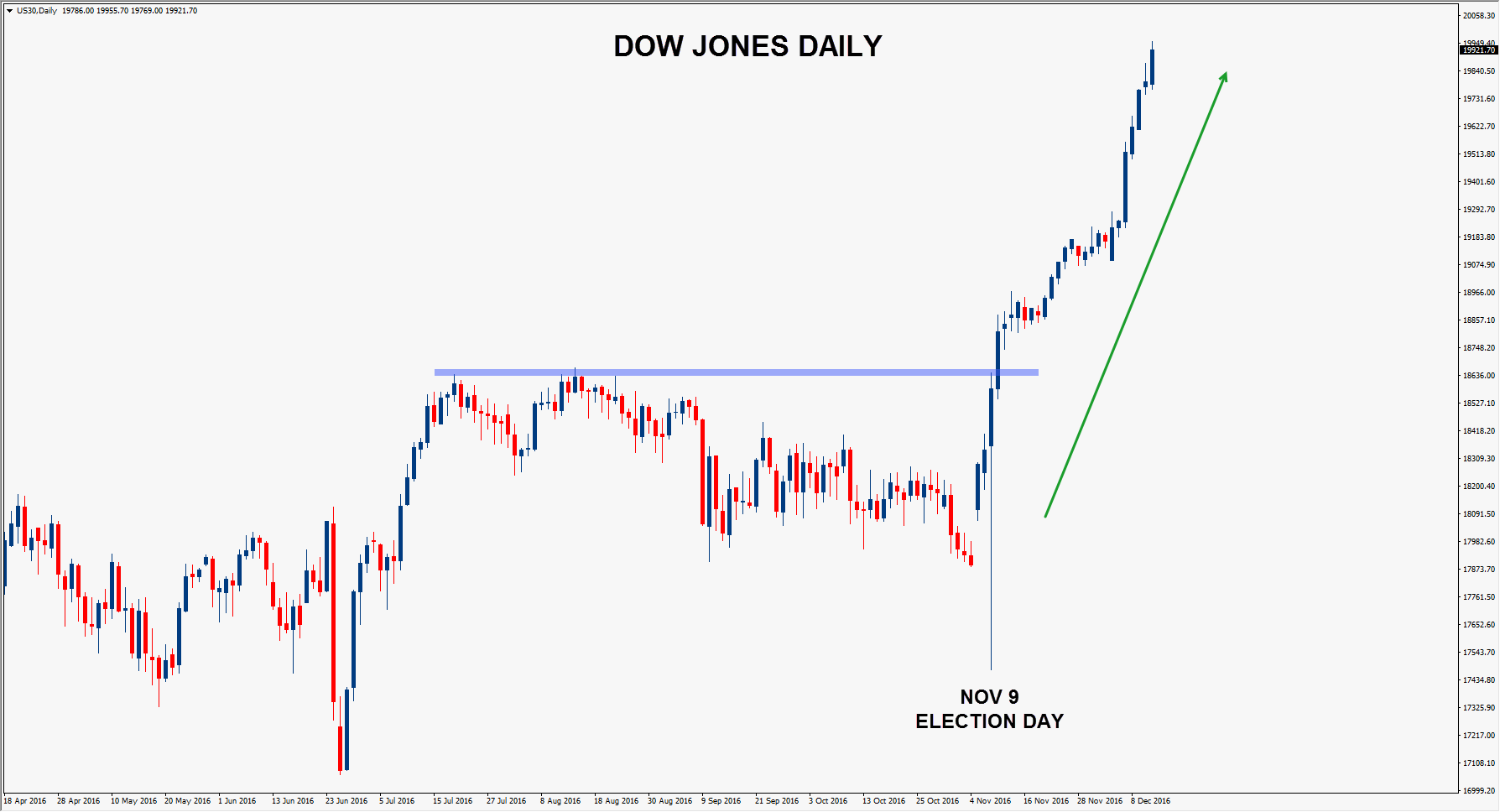 The chart above clearly shows the fundamental shift in US stock markets as we are now in blue sky territory. Adding to this fundamental perspective, we anticipate that should US interest rates begin to rise, certain factors will come into play.

One that has not been talked about in the media will be the beneficiaries of a potential new rate hike cycle.

As we move into the new year, one of the key drivers we will be watching will be whether banks can come back and outperform in 2017. At present, we are currently seeing the yield curve and bond markets re-price, and this may likely (ultimately) send bank stocks soaring.

With respect to the major averages, there continues to be a lot to talk about. The Dow Jones is within striking distance of 20,000 and the S&P is not far from our 2300 target.

However other indices around the world are lagging and so once again we look to the US as the leader. Some of the talking points our traders are considering on the desk are:

A quick look at the Nasdaq 100 shows us how this market is poised into the New Year, and if tech stocks really start moving we could see substantially higher prices in 2017: 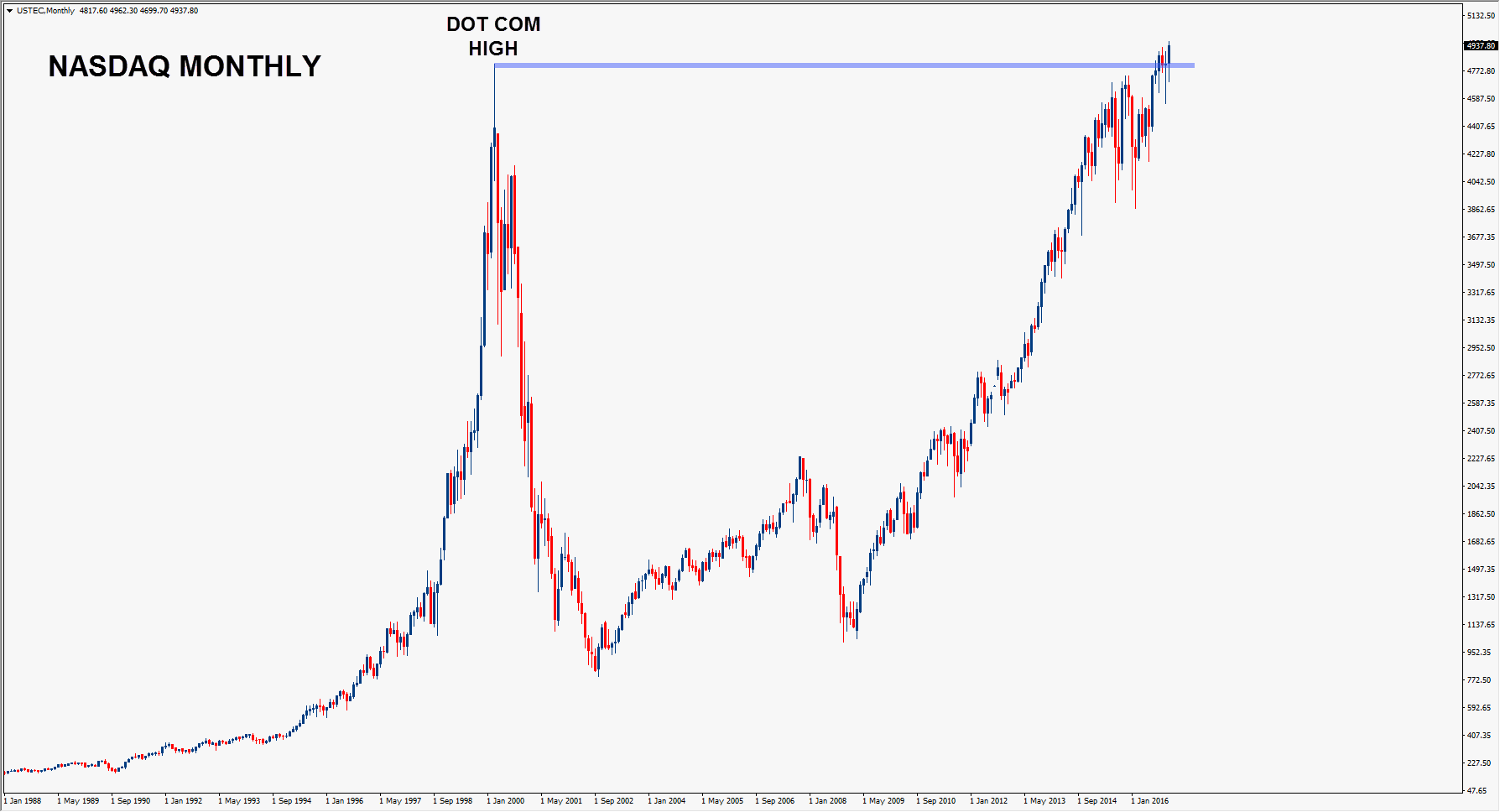 We have mentioned to many of our members in the MEMBER PORTAL this year that equity markets we’re looking higher into the year end.

But we first spoke about this last year in June 2015,
and now is a good time to review our thoughts in our article titled: Are you a bull or a bear?

So the stage is set for a continuation of this move higher in 2017, but it won’t be without some surprises…

This year we continued to see bad news swept up by the market and forgotten instantly. The year began with fears out of China, then issues surrounding Deutsche came to fruition (what issues!). This was followed by BREXIT, and culminated in the uncertainty surrounding the US Election.

There are however some things we cannot forget:

This year we continued to see ‘political’ unrest; and the so-called rise of ‘populism’ was front and center around the world. Events like BREXIT, the Trump election and the recent events in Italy have shown us that markets are capable of warning us of such events.

Why is this important? Because as traders we must be aware of the impact such events can have on our strategies.

Looking forward to next year, there are two particular events we are already preparing for:

With Europe’s two largest countries going to the polls, we only need to look to what happened throughout this year in the lead-up to the US Election. The question we ask you is:

‘How will this affect your trading models and systems?’

Another scenario we are watching in 2017 focuses on the ‘7th year phenomenon’. Over the past century, we have witnessed a statistical phenomenon whereby the 7th year has resulted in some very substantial bear market events. We only need to look to the past few decades to remind you of some of these events:

However many traders do not realise that prior to each of these events, we saw bull markets in Major Indices ‘runaway to the upside’.

We have yet to see this across the world’s Major stock markets, but if the rest of the world catches up to the US this may be something worth thinking about.

Will the European Elections cause havoc next year?

And will the Central Banks continue to be as ‘active’ as they have been over the past few years?

2016 was a year of uncertainty that culminated with some very directional moves across many major markets. If 2017 is as we expect it to be, we could see a continuation of these directional moves with the potential for a major surprise, as we saw in 1987, 1997 and 2007.

Our Head Trader Rob mentions this time and time again- BE PREPARED. When the move comes you need to be READY!

With 2016 behind us, we are happy to announce we have some fantastic proprietary tools coming to traders in 2017. These tools will help you read, gauge and trade the markets as our traders on the desk do.

Until then, from everyone at Trade View we wish you a safe and Merry Christmas and holiday period.

This article is FREE.

Come and see everything else we have to offer in more detail.

Try us for a month by signing up to our Member Portal for just $19.95, with no obligations!

Find out more below: