Home » Insights » Greece is the Word

On the 5th anniversary of the May 2010 flash crash, we again find ourselves in an extremely volatile market but this time the landscape is entirely different. High Frequency Trading firms and algo’s are still being criticised for their ingenious and clever ways of extracting profits, but today’s topic deals with a much bigger issue that may ultimately affect all markets.

Will they remain in the Euro or will we see a ‘Grexit’? 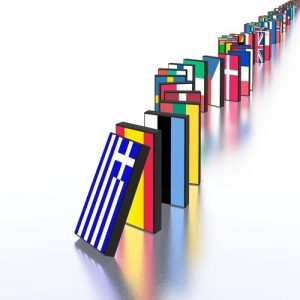 We believe that despite their huge debt and whether or not Athens will make good on their promise of repayments, Greece will remain part of the European Union. Why? Because if Greece goes, the Domino effect begins, and all remaining PIIGS countries (Portugal, Ireland, Italy, Spain) have a green light to exit too.

In our view this would be a catastrophic event and likely cause a significant devaluation/crash-like event in the EURO, resulting in a collapse of the monetary system. Obviously this is something all EU members and the ECB would want to avoid.

Unlike other areas of the world, Europe is unique in that it has one monetary policy set by the ECB and multiple fiscal policies set by the respective governments. Until there is unity between the ECB’s monetary policy and all EU members we see additional pressure to the downside in the EURO, and continued conflict which stems largely from a sovereign debt crisis still unresolved.

But the biggest problem for Greece is not monetary policy vs fiscal policy. The true wealth of a nation is not just it’s balance sheet or gold reserves, but the total productivity of it’s people and their capacity to produce. Unfortunately for Greece- the people’s inability to pay taxes coupled with very early retirement and low productivity has led to a critical situation that may affect all markets and asset classes.

The stage is set for an exciting and highly volatile period over the coming weeks/months as we get a deeper look into how Greece manages it’s repayments owed to the ECB and IMF. We believe that the consequences of a Grexit are too substantial for the EU to allow such an event, and should Greece fail to make timely repayments, they will be exempt from any further defaults.

If you would like an in-depth understanding of how our prop traders view the markets, you can  join or LIVE CHAT ROOM for only $19.95 p/month.