The past fortnight shows us that markets are interconnected now more than ever. The extreme volatility we saw across most asset classes culminated in a huge sell-off on Monday 24th August, which undoubtedly tested many traders. To understand why this ‘Black Monday’ event occurred, we will provide a sneak peak into China and demonstrate the real impact China has on the rest of the world. 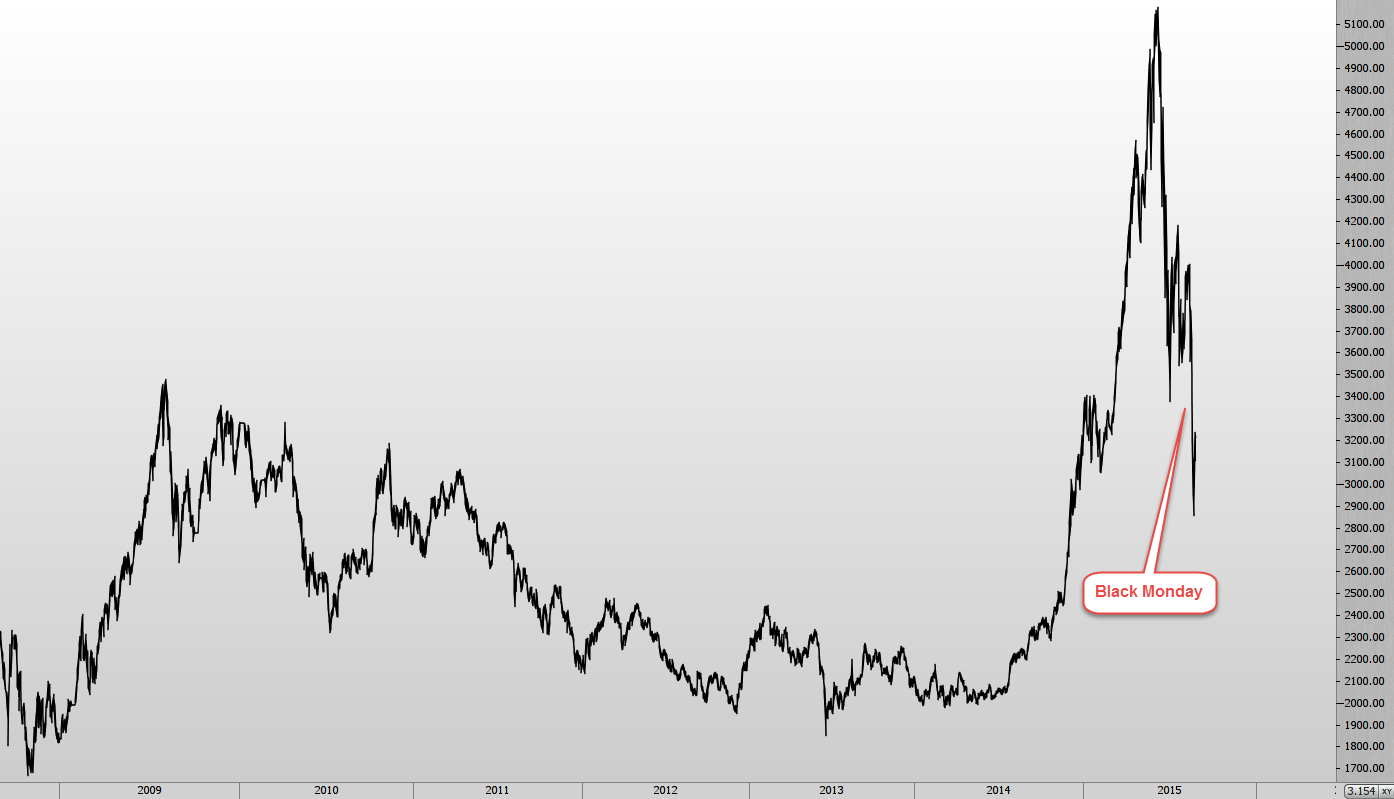 Is China a free-market economy for everyone?

When we look at the actions of China’s Central Bank (PBOC) over the past 12 months, the PBOC has been slowly cutting rates of the Yuan and in recent months this has accelerated. We have seen this type of policy initiative from other central banks and is a tell-tale sign that perhaps the economy is slowing down. By cutting rates, the central bank is trying to stimulate the economy through increased lending and activity creating growth.

Adding to this the Chinese government has heavily promoted investment in the stock markets for a sustained period of time. With this recent crisis, they have also provided additional finance measures to state companies, helping them purchase shares in an attempt to contain their spiralling out-of-control market.

What does this all mean? They don’t want the market to go down.

But as in the past, unless a market is allowed to operate free from major government intervention (manipulation), it may not revert to levels that reflect true values.

As such we may continue to see wild volatility and/or similar events in the future.

Does the Chinese government inspire confidence?

Historically governments have been late to the party in trying to prevent a meltdown or crash. However the real questions traders must think about are:

And finally, does this government and the central bank have processes in place to deal with extreme stock market volatility?

Again as traders, preservation of capital is of most importance. We should always ensure our risk and exposure (which should account for unforeseen events or government intervention) is appropriately managed.

Which leads us to the topic of transparency.

What about Economic Data and Trade?

From a data standpoint, the biggest issue with China has always been one of transparency, governance and potential corruption. Many traders are ill-informed on the data that comes out of China and whether it is trustworthy or not. It’s widely believed corporate governance is improving, but transparency still has a long way to go to reach standards of other major economies.

It’s also widely known that whilst China owns a lot of US debt, it’s national private and state debt currently totals > 200% of the country’s GDP (debt-GDP ratio, source: Bloomberg). By comparison, the US is half of this, Germany at ~75% and Australia less than 30%. These high levels of debt-GDP ratio are concerning as historically they show signs of a highly leveraged market, where further debts may be incurred.

Another consideration worth mentioning is much of this debt is served internally. The Chinese government has not fully opened it’s doors to foreign investment, preventing international investors and institutions from access to their local markets. It has been reported that foreign investors make up less than 2% of the local Chinese markets.

What does this mean for the rest of the world?

China accounts for ~20% of the world’s population. Comparatively speaking, this is almost twice that of the European Union and the United States combined. Historically China has always been known for it’s cheap (both value and quality) exports; but today it is a major importer as the country fuels its expanding economy and massive population. A prolonged recession in China may result in more uncertainty in global markets particularly for companies/countries that rely heavily on Chinese exports and those importing their goods into China.

For the time being the media is proposing the Chinese are doing everything they can to stay on top of these markets. But what if they are not? What if China is indeed in a serious Credit bubble and we begin to see mass currency outflows, a more aggressive FED, and deflated Yuan? What then?

It’s no secret countries around the world are trying to use their currencies to gain an economic and/or strategic advantage. The recent devaluation of the Yuan by China’s central bank is a perfect example. These announcements create fundamental shifts in trends that all traders should be aware of, as their impact tends to follow through in the longer term.

The second point worth mentioning is when (if) the Yuan becomes fully convertible. This is a process known as currency internationalisation, where the currency becomes floated as a reserve currency. It may then compete with the US Dollar in pricing and trading of products traded around the world (such as the commodities).

Do you really think the Chinese will pay Russia in USD for OIL in the future? Something tells me, I don’t think so.

As you can now see, China has a huge influence on world markets. Any turbulence in their markets will send shockwaves throughout the world.

We know that China is forging a new space in capital markets. At present Chinese authorities are imposing strict policies to ‘hold the market up’. If they fail the consequences could be much bigger than anticipated and the chances of a larger scale crisis, particularly in Asia increase dramatically.

If however they can regulate their markets, inspire confidence in the system, and stabilize volatile environments they will become a leading market for the rest of the world to follow. This in turn creates a bullish tone.

And as traders we may also find ourselves waking up every morning and asking what is China doing today?

If this article has you thinking, come and see what our professional prop traders think as they call the market as the action unfolds in our LIVE CHAT ROOM for only $19.95 p/month.

Receive fresh trading insights and analysis straight from our Trading Desk every month.
Subscribe now to get unlimited access to Trade View’s Newsletter