Home » Insights » BREXIT - A new name or nothing new?

With less than a week away, financial markets are now prepping for one of the major, historic events of 2016: Brexit.

For those unaware the Brits will vote next Thursday the 23rd June, to decide whether Britain should stay or leave the European Union. During this referendum voters need to simply provide a ‘Yes’ or ‘No’ answer.

So will Britain remain a part of the EU or leave? And what impact will this referendum have on the markets? Before we dig deeper into this topic, let’s consider some important points we have learnt from other referendums of the world.

First we should all be aware that whilst a majority “Yes” vote is required for Britain to leave the EU, it does not guarantee a Brexit. Negotiations may still be required on certain policies and law, and there is one big obstacle in the way: GOVERNMENT.

We’ve seen numerous occasions in the past where the majority vote has won, but the state seeking “independence” (or leaving another union state) has failed to obtain it.

So what does this mean?

History shows us that contrary to what the general public ‘think’ may happen- the odds are stacked against Britain leaving the EU.

Despite the UK’s love-hate relationship with Europe, they have long been a proponent of the EU before its inception- as a member of the EEC (European Economic Community) back in 1973.

The EEC was formed to foster economic cooperation following World War II. With the idea that countries who trade together are more likely to avoid going to War, the EEC allowed for community of member states to come together, ultimately forming what is now known today as the European Union (EU).

As we know, the UK is a key contributor and trade partner with EU Members. Approximately 50% of British Goods exports go to the EU, and ~6% of EU exports go to Britain. From a fundamental perspective, it is worth noting that both territories rely on trade with each other.

What else can we learn from the past?

We’ve seen many occasions over the past century involving referendums for membership of a state, union or a breakaway (independance). Here on the desk, the events below immediately come to mind:

1933: Western Australia seeks to withdraw from Australia.
Back in 1933, a majority vote for independence paved the way for WA to leave Australia. This majority vote was sent back to the British Parliament for approval, but guess what? DENIED. A committee ruled the referendum invalid, as it did not have the support of the Federal government.

1999: Australian republic referendum
Leading up to the referendum there was general consensus showing that Australians warmed to the idea of become a republic. In the end- Australia voted NO, and the idea was squashed by opposition groups going forward.

2015: Grexit
In 2015, we saw heightened default conditions in Greece and once again- many were anticipating Greece would be kicked out of the EU. However as we eluded to here, Greece remained in the EU by way of a bailout plan..

For many years, Quebec, a predominantly French speaking population has also tried to gain independence from Canada since the early 1980’s, whilst the state of Catalonia (home to the city of Barcelona) has tried to leave Spain – again only to be blocked by the Spanish government.

If you think you live in a democracy where your vote counts, think again. Governments can often do all they can to block such actions.

However- we should also be aware we have seen ‘successful’ dissolutions, albeit under very different circumstances; and in many cases this led to severe economic hardship:

However Britain is in a different scenario. Britain is an established nation, a world leader with its own currency, and governs a large economy that can sustain a Brexit or rebuild if need be.

So what does this all mean?

The Pros and Cons

There are five main themes surrounding the Brexit vote:

As Britain is not a “full” member of the EU, it does not have as much influence within the EU compared to other nations such as Germany and France in the financial markets. However as a major trade partner and a major player in the global picture, talks of a Brexit have created much uncertainty in the markets and markets do not like uncertainty.

In the lead-up to Brexit, much of the talk has surrounded the British Pound. Here on the desk we always look at the bigger picture and have our eyes open to what impact this may have in other financial markets.

The EURO has somewhat been forgotten in all of this and we should be aware there is significant risk in this market also.

The Technicals – Are the charts a man’s best friend in this mess?

A quick look at historic long-term charts shows exactly how jittery markets are leading up to the referendum. 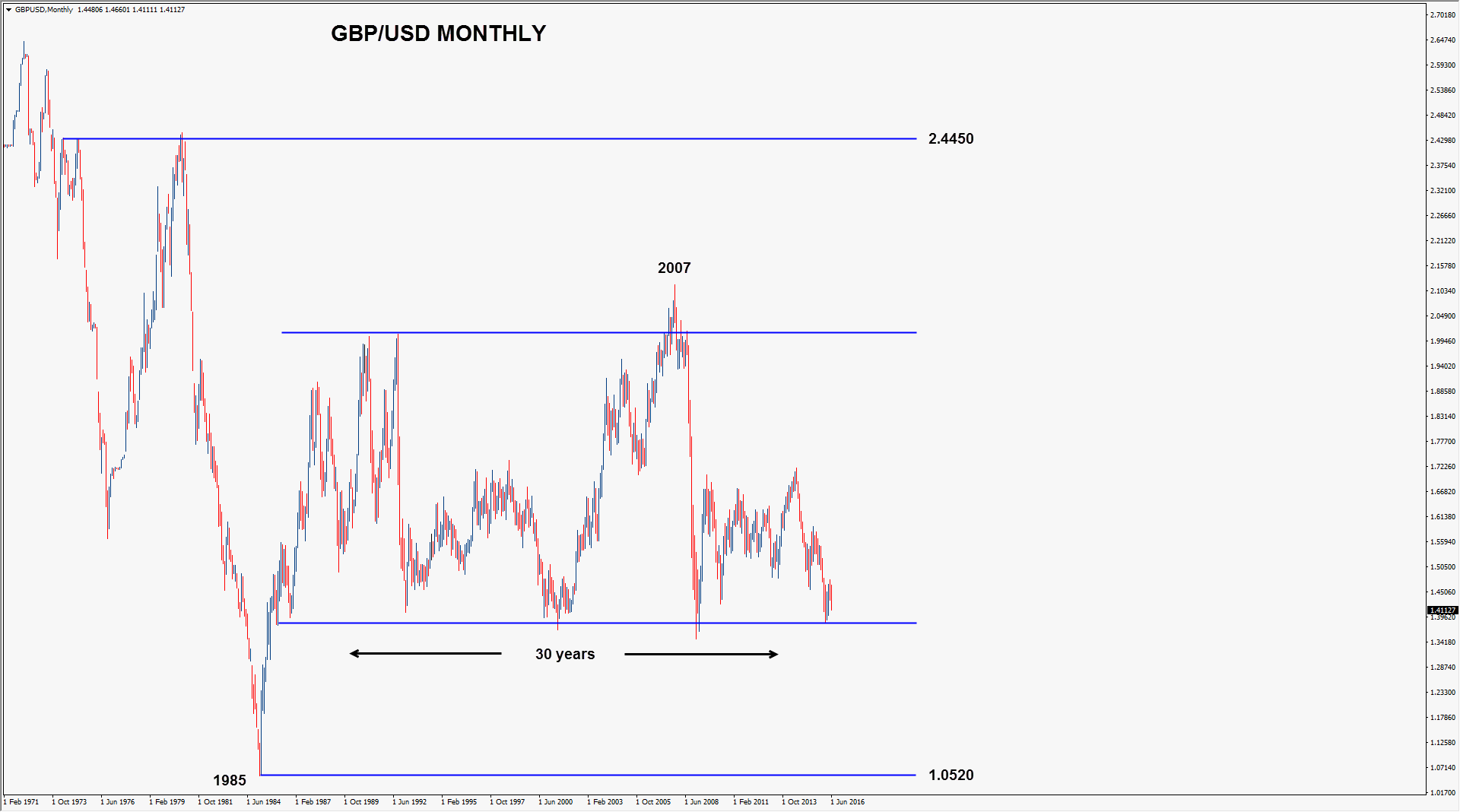 In the chart above we can see the British Pound has been in a 30year sideways range and is now at the lower end of this range.

A break to the downside could see the GBP head lower and potentially retest the 1985 lows in the coming years.On the flipside, if this market fails to break lower post Brexit we could see a SIGNIFICANT rally higher from these levels. 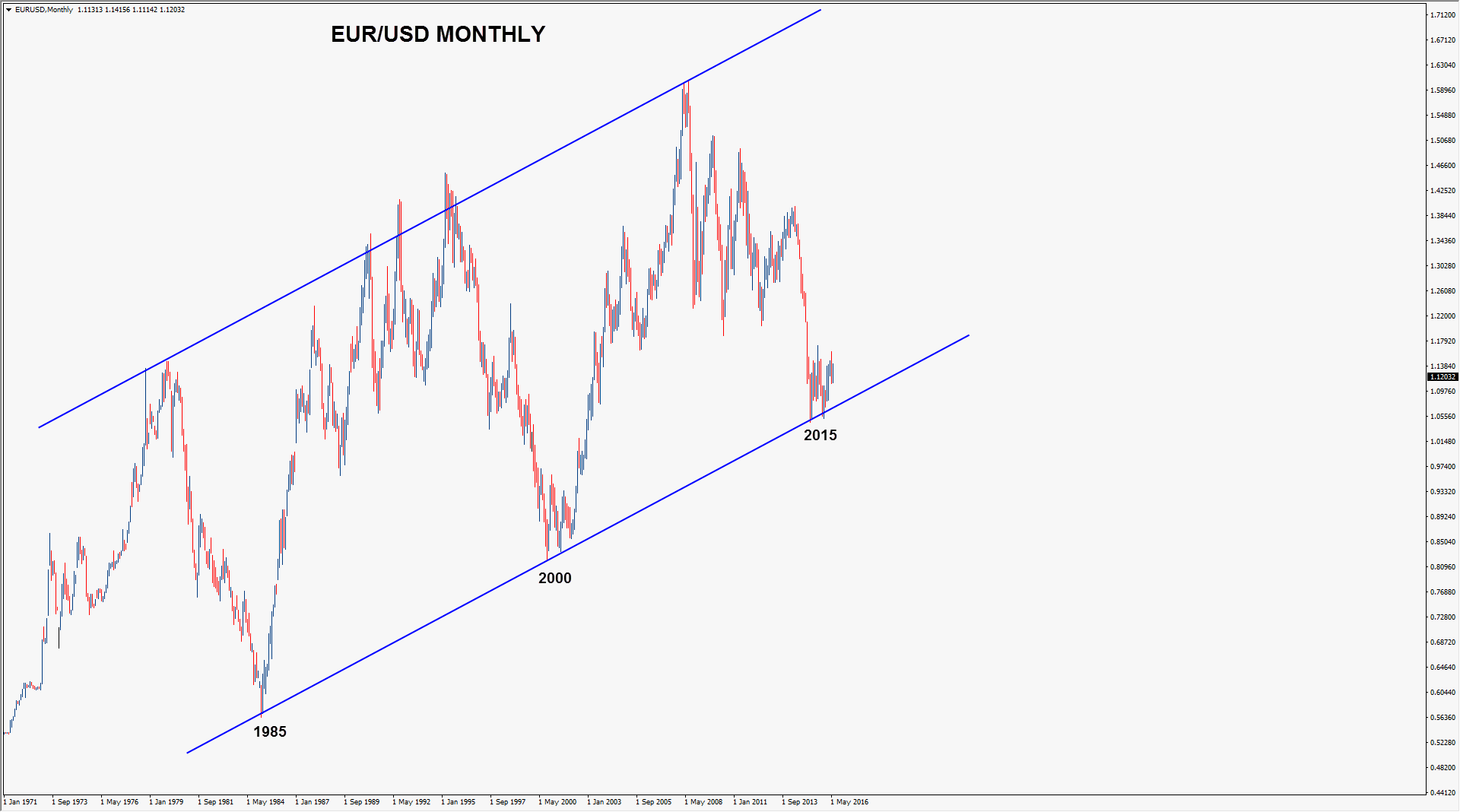 Like the Pound, the EURO is also at the lower end of a long-term channel. A move higher could also see a significant rally in the coming months & years, however a break lower could spell disaster for this market. 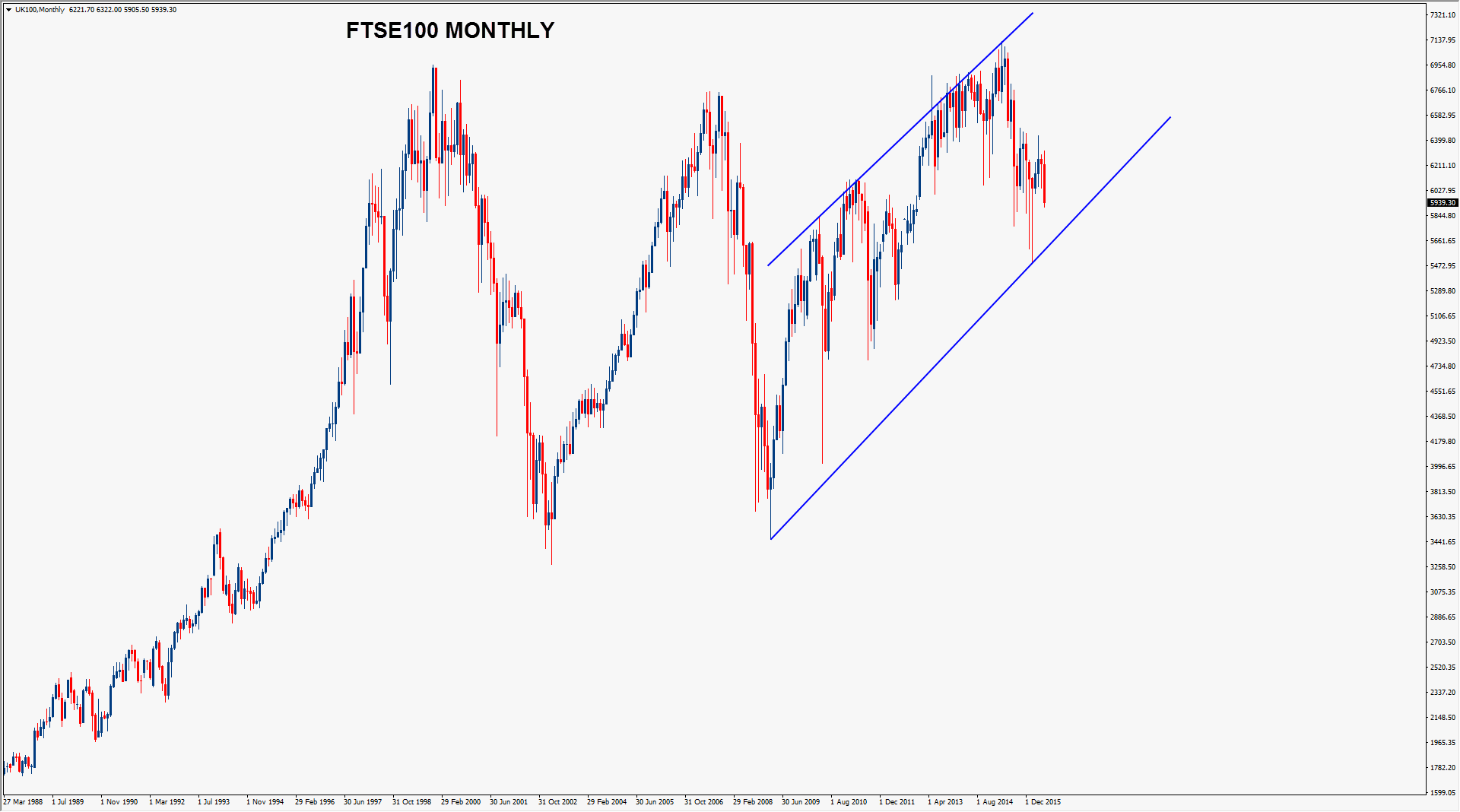 The FTSE100 (top 100 stocks in the UK by market cap) has also shown signs of uncertainty over the past 12+ months. With strong selling over the past week, this market is showing signs of nervousness.

We have known of these conditions for many months now, and we’ve outlined how to trade in these conditions in the past. Over the coming week we will be paying extremely close attention to these markets.

Markets often leave footprints before a major move and we will be discussing all the events, news, technical levels, and trades in the upcoming week exclusively in our MEMBER PORTAL.

Over the past month, we’ve mentioned to clients that intraday volatility has increased significantly in currencies- particularly in the GBP/USD. The choice voters have next Thursday, 23rd June will have a profound impact on the financial markets.

This vote may very well determine the next major move in the Pound and EURO. It could happen immediately with large gaps and strong directional moves, or it could take weeks for the market to disseminate the implications of the result.

One thing we know for sure is to expect high levels of volatility. If your system(s) and/or strategies do not account for this, you might want to pay very close attention now and ask yourself the question:

Do I understand all forms of market risk next week?

If not, what’s the strategy?

Remember – going into the vote with the hope of an event occurring is GAMBLING, not trading.

More information on the impact, consequences and outcomes of BREXIT
is available to existing Clients.

If you are an existing client please Log In.