Home » Insights » Are You A Bull or Bear?

US equity markets have moved sideways for the most part of 2015 as we eagerly await the FED’s next move. Markets are expecting a rate hike cycle to begin sometime this year, and the FED has stated they will make a ‘data-driven’ decision but have yet to indicate whether this will be in June, September or even December. So the question now begs – where do the markets go from here? The ‘Sell in May’ adage did not play out as we reached new all time highs in May. Is this a bullish sign? Our view is to expect continued volatility with higher prices to come, and ultimately a continuation of this bull market which began back in 2009.

It’s often said that one cannot anticipate the future without understanding the past or where we’ve come from. As we move through the markets day by day, we can easily forget the bigger picture and not be astute to what may really be taking place.

Over recent months we’ve seen many reports and experts voicing their concerns that this bull market is coming to an end. In any event, as a firm we are always thinking what specific fundamental shift would need to occur for this to happen?

To elaborate on this further –  let’s look at some of the major events that are currently playing out in the markets.

We recently dispelled the myth of a potential Grexit in our last article here. A Greek exit may indeed spell disaster for global markets but this is not in the best interest of capital markets and the ECB knows this and therefore will do everything in their power to prevent such an event from occurring.

We also know that as of March this year, the ECB began its bond-buying (Quantitative Easing) program aimed at boosting inflation and stimulating the economy. Europe has finally decided to follow in the footsteps of the US, Britain and Japan. This €1 trillion program is bullish for European equities and astute traders may have previously seen signs of this; particularly in the DAX futures market. Knowing when the these central banks are around can be crucial for anyone exposed to these markets, particularly in the short term.

When you consider the the chart of the S&P 500 below and the current landscape, it should be of no surprise as to why markets have behaved like they have this year. Markets are forward looking and act as a discounting mechanism, and we believe the recent volatility is the result of a rate hike being priced in later this year.

Now that we know what is occurring in the markets it is time to do the most important part.

Make a trading decision or decipher the news at hand. To do this we will look at a purely mathematical view.

Keen traders will note the high of 1370 that occurred in May 2011 rallied strongly from the final low in March 2009 of 666. We have seen this many times in the past where an equity market will find support/resistance at a level, only to then double in price before another significant top is in place. 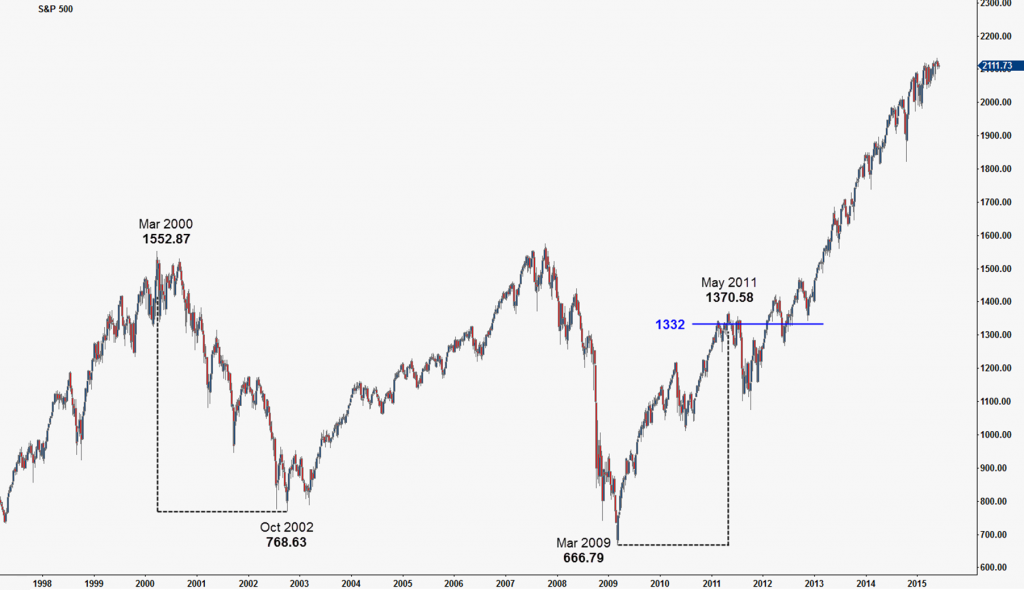 Coincidence you say? Maybe not.

Here are some other major examples on the S&P500 over the years:

The thing we find interesting is that often a doubling in price from major lows and highs is followed by a major move down and in most cases a 50% correction. But this has now changed because the S&P has surpassed the previous highs of 1552.87, therefore we see a new cycle forming where 1552.87 could be the new significant high. 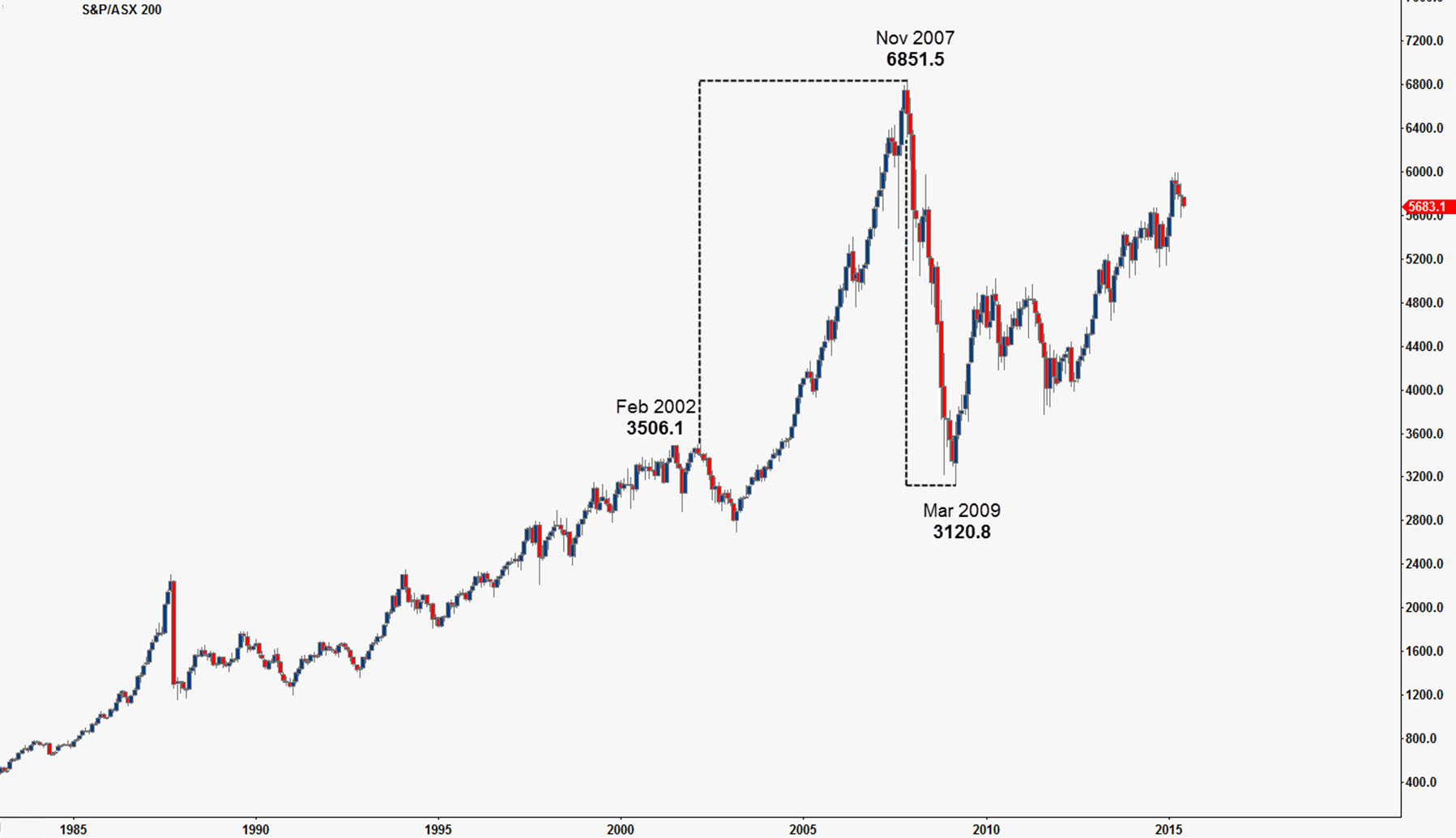 Historically, we would anticipate a 50% correction and we were not disappointed, with the XJO losing 54% of its value.

This phenomenon occurs in many markets over and over again, and is something all traders and investors alike should consider very very carefully.

Considering a move to the downside

In taking an objective stance we must also consider what a move to the downside would look like. Should the S&P500 top at current levels, a repeat of its historic nature to correct 50% would give a price around 1067 (from the current all-time highs of 2134.7). Historically, this would be against the norm as we have yet to see a doubling in price above the previous 2000 and 2007 highs as seen in Chart 2.

We also investigated the percentage move down of every retracement greater than 5% since the start of this bull market post GFC. By doing this we can better understand what form of downside pressure exists in the market relative to previous moves, and whether these moves down are gaining strength and momentum. 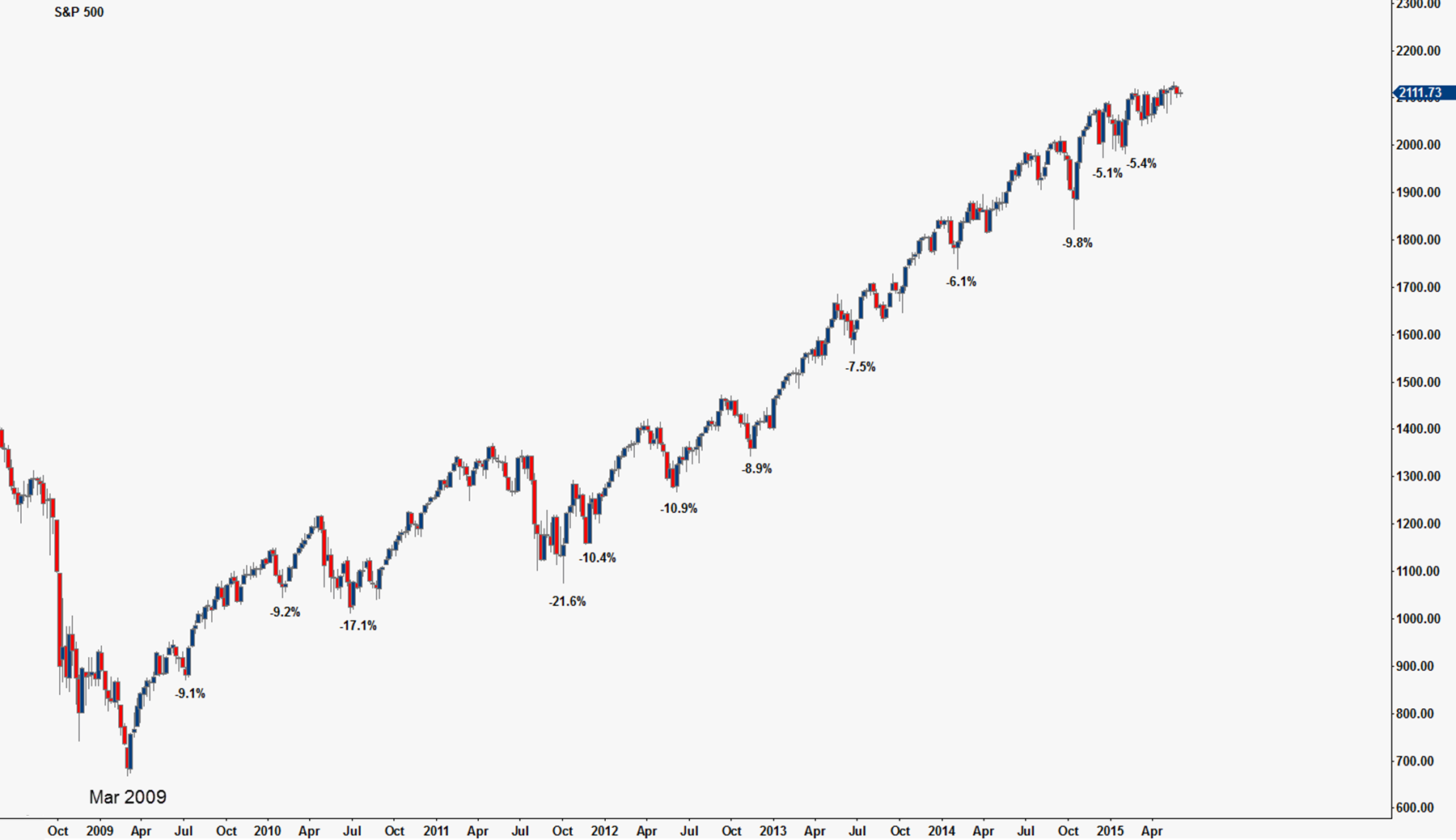 Chart 4: S&P500 corrections to the downside throughout this bull market

Through careful examination of these moves, we can see orderly corrective moves of similar magnitudes. This shows that every time the market has sold off over the past year or two buyers have stepped in very quickly, with the market rebounding straight back up as all dips are bought. In our view this is very bullish behaviour.

But if we look to history and consider some simple statistics, the odds favour a much greater move to the upside before this bull market is truly over.

We have seen bears shorting this market and pundits calling for a top all throughout the year. If this bull market is indeed over, the real question we must ask is this:

Answer this and you have yourself a 50% correction.

If this article has you thinking, come and see what our professional prop traders think as they call the market as the action unfolds in our LIVE CHAT ROOM for only $19.95 p/month.